Make sure you read the post below this one.

Having a unique point of view, I used to play for the Gray Bats and I currently play for the Ducks, I’ve been asked to write a commentary on the matchup this week. So, I’m gonna put a plug of Skoal in and hopefully write something worth while.

* The South Oakland Ducks in no way encourage the use of chewing tobacco.

I’d like to start out by saying that Larry is a good coach. He knows as well as anyone where to put his players to maximize their output in the lineup and on the field. I would also like to say that I played for the Gray Bats during the fall. Things were alot more laid back then they were now. I can’t comment directly on the way things are handled in the Gray Bat’s dugout during this season.

There are three things that a coach must manage successfully in order to be successful: team chemistry, player happiness, and gameday management. A delicate balance of these three things must be maintained throughout an entire season. This is the reason the Ducks are so successful this year.

You wanna see team chemistry? Come to a bar with the Ducks some weekend. 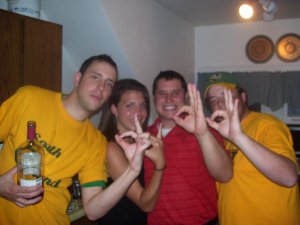 I’ve never had more fun playing baseball than I have this summer.

As for gameday management, our record speaks for itself.

I guess what I’m getting at is there’s a reason why the Ducks have a 25 man roster. The Ducks have gotten the formula hit on the nail pretty well this season. Yes every team has their bumps in the road and we’ve had ours, but take this team and throw them into a different system and you don’t get anywhere near the same result.

When I played for the Gray Bats I instantly knew I didn’t fit in. My heart was set on being a duck pretty much straight away. With the Bats there was no chemistry and there wasn’t much going on there. Nothing against the Bats or Larry, but instead of pity and mockery of the Ducks, maybe you should be taking some notes. Enough has been said about Larry’s placement in the lineup. Player-managers have taken shit forever, either change or live with it, those are your two options.

So there you have it. Let the comments commence.