DISCLAIMER: There are a few good guys on the Rebels, some of whom I’ve played alongside in tournaments, they play the right way, and they probably had nothing to do with this mess. Then again there were probably some decent folks who fought for the confederacy.

Apparently the Rebels had better things to do Monday night than play baseball. The Rebels’ coach called the umps and told them the game was rained out, then told his team it was canceled, before he called [Ducks Manager] TC to confer on the status of the field. It wasn’t their decision to make, the home team’s manager makes that decision. If we could have rescheduled we would have called the game before we spent all that time getting the puddles off the infield, which we did four hours before game time.

Rick tore the sleeves off another shirt for nothing.

Springview Field was damp and muddy, the conditions were not ideal but we could have played. Ducks’ players spent approximately three hours getting the standing water off the field and adding dry sand and kitty litter to the soft spots. We were operating under the impression that we were out of rain dates, making it impossible to reschedule the game. To be fair, it’s likely the Rebels’ coach was unaware of the lack of a rain date. However, their coach told me one of his players was there (in between the Ducks 4-5:45 field repair tour, the 7:30 pre-game rake) and saw a puddle on the field, the Rebels coach was misinformed about the puddle situation by one of his players.
The only way we would have been able to play was if the rain held off, which it did.

Maybe if the Rebels were represented at the pre-season managers’ meetings they would have known about the rain-out policy.

Then I talked to the guy on the phone, I said the field was bad, but playable, that we had been down there all afternoon and were still working on it. he relayed the misinformation and added, “We’re not playing on a field like that.”
clearly insinuating his team is above playing on a field fit for Ducks.

We’ve played on worse, we did last season against the Rebels, of all teams, in a game we lost something like 24-17.

It was during that game I heard one Rebels’ player say, “If we lose to this team I’m going to kill myself.”
That made me feel angry. Not that I hold a grudge, but I don’t think any of those kids are getting drafted. Except for that guy they had who pitched in the Blue Jays minor league system, whom I singled off of. Anyway, that’s the same lack of respect they showed by canceling the game without first conferring with TC.
I hate playing in bad conditions, but its better than not playing at all. The Rebels would rather not have to get too muddy than follow the rules set by the League President regarding cancellations.

Why in the world would you name your team the Rebels, and use that Yosemite Sam logo?

The Rebels were once part of the Black Sox, and they split to form their own team before the ’07 season. They seceded from Kenny’s team, probably because they didn’t like how he ran things. So they are drawing a clearly Confederate parallel to their team.
At some point there must have been a conversation along the line of this:

“Let’s start our own team because Kenny’s a dick, and [third base coach] Randy is insane.”

Jesus, is this Mississippi?

So their coach handpicked the best guys from around the league who were on losing teams and the Rebels won the Championship last year.
During their championship season, I was the base umpire for one of their games in which they had seven guys show up. I said I’d play for them so they could at east have a real game, with just the plate ump. Instead they picked a kid out of the stands wearing jean shorts who was left handed and stuck him in the outfield with a right-handed glove. The kid had obviously never played ball before, and they decided to go with him instead of letting me play for whatever reason. Not to sound selfish, anyone playing with the correct handed glove would have brought at least a shred of integrity to the atrocity which occurred on the field that day. Sometimes that stuff happens, my dad played in one game in ’05, for instance, but we didn’t have a choice. My dad is sick.
The Rebels have a long history of being terrible ambassadors for our league, which needs all the help it can get; they take free agents and then if they aren’t good they just don’t call them anymore.
Their front office is largely to blame for last seasons’ umpire fiasco.
They are the champs, though, they do know how to win. 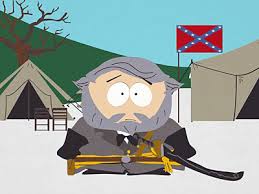 I’m not really surprised a team named after the darkest chapter in American history pulled a stunt like this.