On a slightly-related note, Kenny recently released his personal assistant.

Until Kenny Powers tells me otherwise I’m going to assume Ron Florian is injured, he only played 2 innings last game.
The Black Sox are a better team with Florian in the lineup, he hits doubles and runs fast.
The Ducks are in first place in the Monongahela Division.

There’s a crap-ass Allegehey Division game tonight.
The Matadors (0-0) start their season against the Oilers (0-1).
These guys are playing out the rest of the season for the right to lose to the Bulldogs in the playoffs.
It’s certainly not too early to make such an assumption. 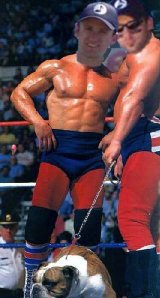 The Bulldogs were the Ducks blog’s pick to upset the perennial Campbell’s Conference power Warriors.

After securing the first 3-0 start in team history, the Ducks are enjoying some down time before a hectic stretch in which South Oakland plays three games in three days.
The Ducks play the Hurricane-Carters Saturday at 5pm, the Eagles on Sunday at 12pm, before returning to the Pond to play the rival Gray Bats Monday night.
Our pitching depth will be tested.
This is clearly the best Ducks team of the wood bat era, no stretch of the imagination; we had a couple terrible teams.
If we were 0-3 I wouldn’t be panicking, so we shouldn’t get too worked up over a 3-0 start.
There are still 21 to play.
It’s always nice to beat the Black Sox.
I will say, it will be fun to see what we look like with Darren Daulton catching and Life on Mars in Center, and all of our infielders there at the same time.
It’s good to be 3-0 while still getting out the kinks.
TC and Adam Smith have been clutch. Whenever you can win without your ace pitching it’s a big deal.
Will we see the much anticipated debut of Mantis this weekend?

Is it lame that the Owlz get to wait to start the season because their players are still being genetically engineered in some secret lab in West Virginia?
Sure, it is. There is a lot that is lame about that team (about everything but the talent-level), but the Ducks have a half dozen key players who are still playing college ball as well, and we’ve managed.
The 50-man roster is key.
90% sure the Owlz lured a potential Ducks recruit to the Dark Side.
That reeks of fear to me.

So high he fell.

Pitt Club Baseball is in the NCBA Regionals after beating PSU last weekend, I think.
To be fair, the Penn State squad was probably suffering from withdrawl after that epic drug bust at State College the other day.
I always find the wording of these drug bust articles amusing in an antiquated 1950’s kind of a way. The trib from Tuesday was hilarious.
Just Say “No”, to trafficing 400lbs. of pot across state lines.
That type of thing would never happen at Pitt.

New hats are finished, and in my posession.

I will give a free hat to the first Duck to agree to write one blog post per week.