The Ducks scored two in the first off a Kirk Gibson single, and an error on a ball hit by Chris Wojton.

Dr. Jones knocked in the game winning run in the bottom of the sixth.

Eagles pitcher Joe Walsh has historically given Ducks aging outfielder Ben Gwin fits. On the day Gwin went 1 for 1, with a walk, hbp, and would score two runs, on a day when the Ducks recorded only 3 hits. (Casale, Gibson)

Jesse Smith is a beast.

Strong starting pitching and defense complimented by timely hitting and unreal blogging have bouyed the Ducks to a .750 winning percentage. Despite their record start the Ducks still trail the 8-2 Black Sox (despite defeating the BSOX earlier this season), and the 7-0 Owlz in the Whales Conference.

With a first round bye awarded to the top two seeds in the Conference the play down the stretch is sure to be heated, despite the new rules which grant all teams a pass into the post-season.

***
Arguably the only two truly American contributions to the world, are baseball and rock ‘n’ roll – blues-based rock ‘n’ roll.
As someone who could not live without either baseball or such music, it should come as no surprise that I can not stand what the Eagles did to rock ‘n’ roll in the 70’s.

You’re better than that Whittaker, why the Eagles?

Why not just call your team the Electric Light Orchestra and be done with it.

“Can you give me number nine?”

The Ducks got off to a quack start when Tony Casale singled before Gwin was plunked for his team leading 3rd hbp of the season.
one batter later… 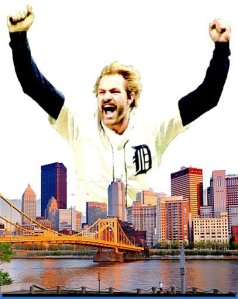 Kirk Gibson drilled a shot to right, scoring Casale and moving Gwin to third.
Larry tried to censor the single but failed.
Gwin would score on the mystery rbi, which should have been attributed to Chris Wojton

(REMINDER: BRING YOUR UNIFORM MONEY, THIS IS RIDICULOUS)

South Oakland of the North Side hit into three double plays, it seemed like everything was hit right at left handed shortstop Don Henley.
The Ducks can field ground balls extremely well, and the Captain kept the ball down recording ground ball out after ground ball out.
“Tyler” had a great game at second base.
(We aquired Fletcher via Rob Cool who hates the Black Sox so much he’s willing to help us out by pointing quality players in our direction.)

snaring a hard hit line drive by Mike “Tyler” Fletcher, and doubling off Keeper of the Helmets after another great play on a hard hit by Murphy.
A left-handed shortstop, that’s about as cool as the song “End of the Innocence”.

Captain America had his good stuff on this day, a peacefull easy feeling enveloped Pie Traynor Field as Guthmanzadeh didn’t allow a hit for 3 and 2/3 innings.
that hit in the fourth was Heartache Tonight, so it only counted with frat boys from the south and old women.

In the bottom of the sixth with South Oakland leading 2-0 Walsh loaded the bases with Ducks.

Jones drives in the third run, but the Ducks fail to capitalize further on the bases loaded no outs situation.

The Eagles make a comeback in the top of the seventh.

Thanks to an error and a single the Eagles had runners on second and third with no outs.
Some guy hit one to left and Chris Carter tries to score from second.
As performed by the Black Crowes

Chris Carter is immediately traded to the Vikings.
Mixed Metaphor City.
Ducks lead 2-1, with a runner on second and one out.
next guy singles to center, Wojton throws to Smith at the plate, Jesse ruins the batters life as he tries to take second.
That’s the type of throw an MVP makes.
Depo catches a pop-up and the game is over.