Christian Necheff (sp.) pitched a complete game for the Orange Crush, allowing two unearned runs over seven innings, striking out upwards of 8 Ghostbusters to earn the win for the O.C.

Tony Casale hit a two out triple in the first inning, but was stranded on third, when Vinny Gala hit a line drive right at someone– the Ghostbusters M.O. for the first four games of the fall ball season.

In the bottom of the first, the Crush had runners on first and second with one out when a potential inning ending double play ball turned into a two run error.

The Ghostbusters had the bases loaded in the bottom of the second but Necheff got the RingMaster strikeout and worked out of the jam when Ben Gwin Grounded out to O.C. second baseman, Joe Graff to end the inning.

Joe Graff, second baseman for the Blues, Bulldogs, and now the Crush, had an uncharacteristically rough game in the field. His mind was clearly somewhere else. perhaps still thinking about how torturous it was to have to play against life partner BJ Rankin in the first game of the double header.

The Ghostbusters defense kept them in the game, turning four double plays. Adam Smith pitched two scoreless innings for the Ghostbusters. In the bottom of the fifth Joe Graff tried to steal third base, Ghostbusters catcher, Garrett Moore, had other ideas.

Graff was thrown out at third, for the second out of a 1-2-5 double play. Strike ’em out throw ’em out. This was Garret Moore’s best inning as a catcher.
Joe was more distraught then when he heard BJ was getting married, to a woman no less. 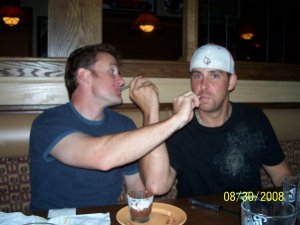 No photoshop needed. They are a deadly double play combo.

The Crush would add another unearned run in the sixth, off relief pitcher Mark Kuhns.
Trialling 3-0 in the bottom of the seventh the Ghostbusters rallied. With one out; Vinny Gala and Eric P. singled, then Shwartz walked to load the bases. Ron Kuhns drove in a run with an RBI force out, and Mark Kuhns followed with a single.

The stage was set

The Ringmaster, who entered the game with an .800 average, came to bat with tw outs and runners on second and third, trailing 3-2, but Necheff finished the game with a strike out, and the Ghostbusters fell to 1-3 with the loss.